The Savage She Hulk

She-Hulk: We Need You More Than Ever

Wait. You never heard of She-Hulk? Funny, because everyone knows about the He-Hulk. He’s a household name thanks to his appearance in the Avengers movies. You can buy him on a lunchbox or even on an iPhone case. He’s a part of pop culture, so why isn’t his female counterpart?

If you didn’t know it already, Bruce Banner has a cousin named Jennifer Walters, and she’s just as green but with half the hype. She’s perhaps one of the most intriguing female superheroes ever created, but no one pays any attention to her. Not yet, at least.

Yes, this does become a feminist issue, because what it comes down to is that no one is interested in seeing a big, strong, green GIRL. She may not be mainstream, but She-Hulk still defies many gender roles, and that’s why we need her more than ever.

Her Gamma-Rays Can Save the World

Jennifer Walters had a normal upbringing, went to UCLA, and then became a lawyer. She was feeling a little lackluster about her life and was having issues with self-confidence. Can’t we all relate! Jennifer could be described as anti-social, unassuming, and not very happy.

It’s a common theme, but everything changed for Jennifer after a random accident. She became injured by a revenge-seeking crime boss in SAVAGE SHE-HULK #1. Her cousin Bruce was with her at the time and gave her an immediate blood transfusion, thus saving her life and making her the She-Hulk. When the crime boss returned, her new gamma radiation particles reacted to her fear and caused her to transform. 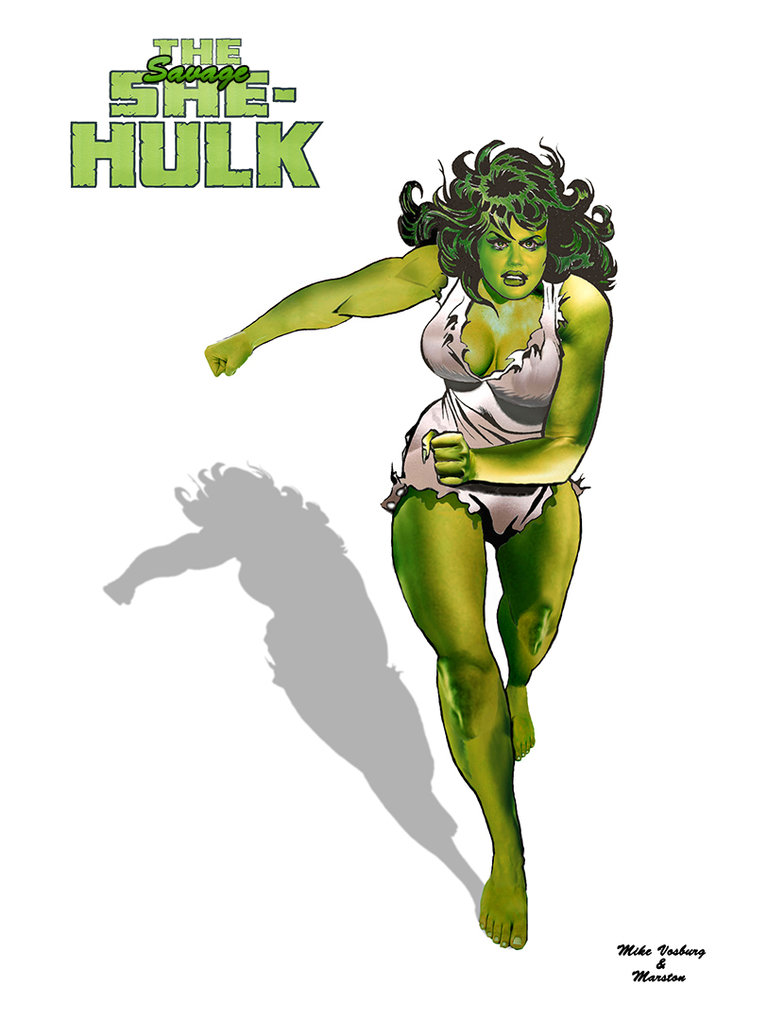 Turning into the She-Hulk ends up being a positive change for Jennifer. She thrives in her new skin, unlike many other superheroes that can’t come to grips with their powers. She has self-confidence all of a sudden. You would think that a woman in a Hulk body might be upset that she’s not the stereotypical American beauty, but not Jennifer. She takes delight in her transformation.

This says a tremendous about Jen’s character, because unlike other women, she does not try to fulfill stereotypes in order to gain confidence, but rather, she uses a horrible thing that happened to her in order to change her perspective on herself. She accepts who she became, and learns to love her new self. Changes that seem horrible can actually lead to great things, and the She-Hulk is a marvelous example of that.

Bring On the Strong Girls

Now more than ever, we need strong female role models. Women in comics don’t always have it easy. They’re often sex symbols at best, and they need to be rescued by bigger, stronger, better male superheroes. This has been the tradition from the beginning and it’s still present in modern comics. Defying the normal female superhero, She-Hulk is strong. We’re not talking about Wonder Woman strong, we’re saying literally bad-ass powerful.

Another intriguing thing about Jennifer is that her full-time job is not superheroing. She’s a lawyer by trade. Most other superheroes don’t take breaks from saving the world to go work in IT. This little dose of reality is what makes her character so much more likable and relatable. Not only does she deal with self-confidence, but she also has to get up and go to work each day like the rest of us. What we have here is a female character that is fully able to balance two stressful lives. What a revelation! Not only does she have to engage in this balancing act, but she also does it seriously well. As a woman, she’s told that she’s not supposed to save the world as a superhero or a lawyer, but she goes about doing it anyhow. In essence, she doesn’t care what the world expects of her.

Why We Need She-Hulk More Than Ever

The latest She-Hulk series was written by Mariko Tamaki and illustrated by Jahnoy Lindsay. It was short-lived, but there were several issues in Jennifer’s life that were touched upon. Tamaki is deft at using the issues that Jennifer faces and showing how they affect her, and how her unhealthy responses affect those around her. Tamaki also illuminates Jen’s inner demons. By the end of the series, she learns to deal with trauma in a new way.

The most important point here is that the importance of She-Hulk likes in her power to be a role model. She’s strong, self-assured, and ignores stereotypes. Younger readers can seriously benefit from reading She-Hulk. They are able to follow a character that struggles with human things, but learns that with the right mindset, anything is possible.

Jennifer has the power to turn bad situations into good ones. She’s a positive force in the comic book world, and she can also have a positive impact upon our world by the example she sets. Thankfully, Marvel has already realized this and she is set to be a member of the new AVENGERS series. Think about how the Marvel universe is going to benefit by having her there. Actually, we’re all going to benefit.